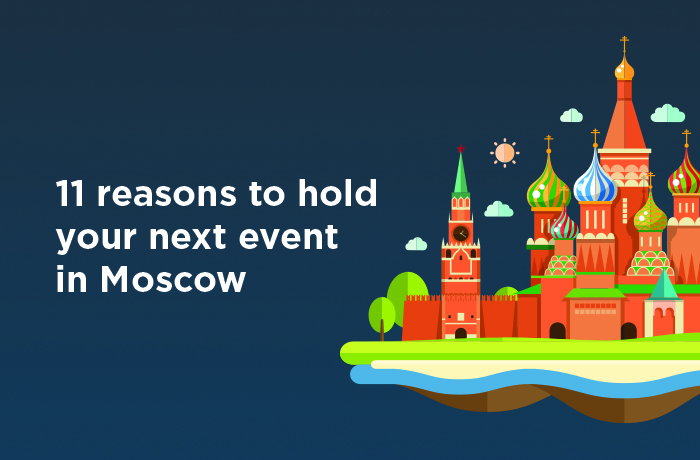 Underground,at Peter the Great’s feet, among ice or in the Europe’s highest building. Proekta made a top list of genuinely unique options for corporate events, which can be run only in the only point of the world – Moscow.

A panoramic yacht with floor-length windows, dinner from a chef recognized by major premium restaurants, and exuberant night life of Moscow. An event on the board of the Radisson fleet is a really unique solution, which combines all the advantages of the capital. The event form can be various – from ashakedown and cozy family celebrations to business presentation and business training. It’s important that they all will be held in unique historical decorations. It seems it’s impossible to find more impressive routes than down the Moskva river. Yachts dodge between the curves of the city, revealing incredible views of the Kremlin towers, wide quays of the Novodevichy Convent, and summer dance floors of the Gorky Park.

By the way, the guests can appreciate the aesthetics and gastronomic fads of the event at any season – the fleet has recently acquired icebreakers. Warm June or snowy December – it’s up to you.

The rotating restaurant on the top of Ostankino Tower

In the Europe’s highest building– to 300 people

To see entire Moscow at one time, appreciate the symbiosis of the world’s cuisines and get to know the most interesting things about the city and its life within one day or night? It’s real. 40 minutes forrotation around your axis, 328 meters above ground and 11thplace among the world’s highest buildings. All this is about the Seventh Heaven restaurant complex located next to the top of Ostankino Tower. Ostankino is a living legend, the center of television and radio broadcasting of the country. And, of course, amulti-purpose site for your event. The restaurant’s floors slowly rotate allowing the guests to see the city panorama in full.

What about teambuilding in Stalin’s bunker? A unique object of nationwide scaleis located at a depth of 65 m. Some time ago the gaze of the chief of nations fell upon Taganka. The closeness to

the Moscow Kremlin, heavily populated by-streets and a modest building – this is what could hide a small but important underground city. In the 50s, the secret object was the place of work of the USSR governmentin the event of a nuclear explosion. It completely protected chief executives from all damage effects. Today in the interior of Taganka, people take tours, do applied military sports, and drink cocktails. In addition, there are 2000 sq. m of authentic historical space here, which was not affected by restoration. It’s here where teambuilding games are run. Activity participants are offered to get out from a real maze, solve a logical quest and become a member of a special-forces raid. On the walks with aninsight into the Cold War, the missile or nuclear bomb launch is imitated. And then you could go to an underground banquet. The hall with its own catering underground accommodates to 250 people.

At the world’s first trotting race track – to 300 people

How to have an evening in the spirit ofRussian aristocracy of the bygone epoch just 5 kilometers away from the Kremlin? To go for the center of attraction of racers’ lovers – to Begovaya. In the lively district among skyscrapers, a green 40 ha island is hiding. At the end of the 19thcentury, the emperor dropped in here, in the early 20thcentury Lenin pontified from the stands, and at the height of the Soviet times, thousands of average citizens tested the luck ofday off on the totalizer. Today, the race track is 3500 viewer places, seasonal races, and four luxurious halls for holding your events. By the way, one of them is more modern and reserved and located just above the field of competitions. Anentourage corporate party can be complemented with riding in a sled drawn by three horses or organizing races with refereeing and mock totalizer. The horse course’s entertainment program features stuntmen’s shows and unique performances of small horses’ dances.

Ice bar caviar and liqueurs in the City tower

A bar made of ice and furs put over the guests’ shoulders, caviar with pancakes and warming liqueurs among ultramodern buildings. This is how the Russian spirit of the 21stcentury looks like. The winter attraction is located the Ruski capital restaurant, which offers its guests an event with alternative national cuisine and small pies from the 8-meter stove. For corporate events, the site is fitted with high-quality equipment and scene. Amould-breaking design, flawless service and best chefs are all good, but they’re only an attribute to the views, which are really mind-blowing. The 85thfloor of the Oko tower, night shining and splendid surroundings of the center of business life are the best offer for an event Moscow of the Future style.

One of the most self-sufficient places of Moscow, which needs neither dancing shows nor any other gimmickry. The exclusive yacht pier 2 kilometers away from the Kremlin, where no outsider could get to just a while ago. The location of the unique site at the Bersenyevskaya quay is not obvious. Stylish interiors of two roomy halls, which accommodate to 400 people, are located in an exquisite building on a tiny island. It was built in the 19thcentury with the assent of Nicholas II. The monument territory had been closed from outsiders for a long time. Today the yacht club is the epicenter of night life of the capital just at the foot of the grand monument to Peter the Great. From windows – view to the Moskva river, Muzeon and stylishfacilities of Krasny Oktyabr. The site’s track record includes fashion shows, famousfilm premieres and GQ Men of the Year Awards. There is everything here to hold a high-quality event –sound, light, theme-based halls.However, to get here is already an event!

An immersive performance in the palace

With immersion – to 80 people

The main trend of the capital theatrical season 2019 is immersive performances. The effect of immersion is created with the help of the viewer who immerses into the action. He doesn’t just participate in what is going on but creates it on his own interacting with actors, changing the scenario and choosing the outcome. The two most impressive immersive performances of the modern time take place in old Moscow mansions. Only 54 participants – according to the number of cards in the classical French deck - are allowed entering the world of the first one, the Queen of Spadesopera-promenade. The lead – Pushkin, 70 performers and an orchestra with two conductors accompany you to the gambling table. Spectators shuffle the cards, enjoy the music and empathize Herman who goes crazy just at their feet. The second one is a classical immersive performance, within which the guests arelet into a secret of the Ibsen’s play Ghosts, garbed with mysterious masks and set forth on a journey to the authentic manor of the Goncharov-Filippov. How and who follow - it’s up to the participant. And also when to be out. The most interesting thing is a great alternative to a classic corporate event, which will give the experience of unspeakable feelings. Dinner, at which you’ll certainly have what to discuss, may complete the experiment.

The cause why everyone goes to Moscow is not just its atmosphere and active life but history. Multi-layer, bright, rich in contrast. How to catch its essence and more than that – to do it within a corporate event? The best solution is a city quest. While your employees level up competitive spirit and skills of navigation on old by-streets, the leading guidearranges a true historical immersion. Smartphones with augmented reality, encyclopedia apps and maps with geotags come out. There will be adventures fitting every taste. You define duration, route, theme and even the language of the action.

By the way, there’s no only the center in Moscow. Today city mansions – Kuskovo, Tsaritsino, Kolomenskoe – offer to combine the action and cognitive program. An event in a series of palaces and gardens is twice relevant – the active program can be mixed up with snacks in the tent with catering. And then to run the awarding ceremony. The scenario is the same – the participants are teamed and get tasks. Collecting points they solve mysteries of splendid palaces and secrets of ancient families. In the end, a final lock code to the chest with a prize is waiting for you. And then – to celebrate victory at thelong-expected party in the open air!

You definitely know that the Russian hockey national team is one of the strongest in the world and since the USSR the hockey fans dubbed it Red Machine. Moscow is a unique place where one can visit the hall of hockey fame and the museum of Red Machine, which will be an amazing discovery for the fans of this game.

On top of that, you have the opportunity to level up your hockey skills in one of the world centers of hockey under the supervision of professional players of KHL – it can be a one-day course where you’ll know how professional hockey-players train and what they do, try everything on your own or teambuilding in the form of a tournament or an open workout.

The Bolshoi theatre is not just one of the main sights of the capital but also a world renowned brand. Within the walls of Bolshoi, there are history of entire Russia in literary works, performances and, of course, former and current stars appearing before the Bolshoi’s footlights. Agree, it would be interesting for everyone to have a look at the theatre life from the inside and try yourself as an actor mastering the basics of the Russian school of ballet.

This is an incredible immersion into the history and arts, getting to know the traditions of the world’s most famous scene.

Who didn’t dream of becoming a astronaut and conquering space, traveling between stars? Zvezdny Gorodok in the Moscow region is the only place in the world where any interested person can try himself as an astronaut or be trained at least. You’ll know, see and try all stages of training of real astronauts, simulators, and tests. This is a unique experience, which you can gain nowhere in the world. NASA, SpaceX astronauts and many others were trained and tested in Zvezdny Gorodok.